Mediapro-AV
Mediapro-AV ▸ How Many Watts Per Channel Is Enough for a Home Theater Receiver?

Choosing a home AV receiver is never a trivial process. Many questions arise, among which the most common is how many watts per channel do I need? In this article, I will cover the main aspects of this issue. Having read this material, you will be able to choose the power of the receiver you need more correctly and competently.

Indeed, manufacturers usually have a wide array of detailed specifications for all their receivers. Such information requires almost professional skills to read and understand all the provided information. Therefore, I will explain to you all the details on receiver power in plain language and answer how it correlates with sound quality.

What do watts per channel mean?

First, let’s define that the power of amplifiers in terms of watts per channel tells you the amount of power the receiver provides to a single output channel. Please note that a single channel equals a single speaker. Usually, when it comes to power, the receivers start from 20 watts up to more than 200 watts per channel.

Many believe that the more watts a receiver provides per channel, the louder it is. Therefore, we can estimate that a 200-watt receiver will be two times louder than a 100-watt one, right? Nope, things are a bit different.

To make your sound system twice as loud, you need to increase its sound level by 10 dB. In turn, doubling the power of the receiver raises the sound level only by 3dB. Thus, for example, if there is a 50-watt receiver and you double its power, it will only become 30% louder.

Talking about power, I recommend paying attention to RMS power instead of focusing on the peak one. Peak power only refers to the maximum power the amplifier can reach in an instant without any damage. RMS power is an important indicator, and I will tell you about it in detail later.

Impedance is another crucial factor that directly affects the power of the amplifier. In short, impedance is electric resistance measured in ohms. So when you compare two different receivers with the same power, let’s say about 80 watts, but the first rates for 8 ohms and the second for 6 ohms, they are, in fact, very different in terms of power.

The formula simply halving the impedance doubles the power output and vice versa. Therefore, in our example, if we take an 80-watt receiver rated for 8 ohms with 6-ohm speakers, it will only provide 60 watts with an 8-ohm speaker.

What are RMS and peak power?

RMS power is the measurement of continuous power that the receiver can handle. Simply put, it is the real power that you can expect from your receiver during daily usage. So this makes it one of the most important values to keep track of.

As you can see, the power of a receiver is a rather ambiguous aspect. But, considering all the vagueness, what output wattage do you actually need for your setup? The power of receivers can affect the sound quality, yet the difference won’t be as audible as one may expect.

I recommend you pay attention to efficiency. This aspect defines the sound produced by a single watt at a 3 feet distance. The more efficient the device is, the louder sound it delivers. Thus, for example, the 100-watt 90 dB and 200-watt 87 dB devices offer approximately the same sound output.

It is always better to have a receiver that can produce more power than your speakers require. Remember, the underpowered amplifiers get the majority of speakers fried. So, always pay attention to a receiver’s RMS.

Finally, when choosing an AV receiver, estimate its weight. Power requires lots of internal elements, which make a receiver pretty heavy. Therefore, don’t expect a light as a feather receiver to deliver all the power manufacturers promise in the documentation that comes with it.

How much power do I really need from the receiver?

Making your sound system louder by increasing watts is not the right decision. So, there is no point in searching for the most powerful solution in the latest amplifier ratings. Generally, one needs about 70 dB to power a home surround sound setup. So, in terms of watts, it will be between 70-100 watts per channel.

Things get a bit complicated if you are going to play audio with a large dynamic range. In this case, for comfortable listening to music when it peaks, you need between 100-150 watts. Note that choosing a receiver with more power won’t make an audible difference if your speakers are not high-end ones.

Speaking of speakers. If you have rather inefficient ones, buying a more powerful receiver is better to manage them. Altogether 100 honest watts per channel will be sufficient to drive the home cinema and listen to any music genre. 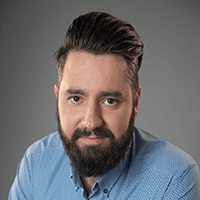 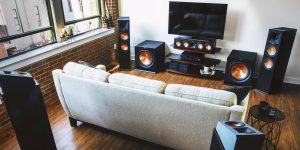 How Many Channels Do I Need in AV Receiver?